puppies!  All thanks to Chris Dogguy Amick for training my sweet Rottie!

"Mr. Amick came highly recommended to me by a local pet care facility. He has been working with my Rottweiler Baron and me. I find Mr. Amick to be very knowledgeable in animal behavior and training results. He has provided information and resources for further learning to me during the process, which leads me to observe that he makes a point of staying informed on the latest techniques and theories on working with animals. Mr. Amick has also been conscientious with my time and dependable"
Joe K. (Baron)  Birmingham, Alabama

"The most amazing trainer that Zeb and I could ever have!" 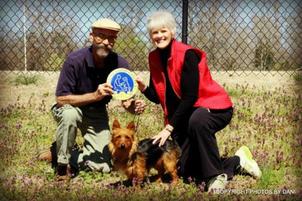 now he is walking him 2-3 times a day. This is great for both of them.
Joanne P. (Simon)   Montgomery, Alabama

I switched from the soft head collar to the prong (training) collar. Used one in the past on my

first Springer. The change in their behavior when we are out now walking and/or in a store is

amazing. No more barking or tantrums when we see other dogs or groups of people. Took them

puppy ran around barking and yapping...that was a huge step for Cash, I am very proud.
Brenda R. (Presley & Cash)  Homewood, Alabama

Serving Birmingham, the State of Alabama, and most of the SouthEast

"... I act as a foster mom for stray/abused/abandoned dogs that are looking for good homes. I
have had eight dogs come through during the past year in addition to my own dog and two cats.
Chris has worked with several of them for both basic obedience and behavioral issues and I have
always been thoroughly impressed with his professionalism. My own dog, Sera, is an extremely
energetic two-year old hound/Rottweiler mix that has been more than a handful and Chris has
come to the rescue numerous times with her as well. She is especially timid around men but took
to Chris with no hesitation at all. I have recommended Chris to several of my friends and adoptive

parents and have heard wonderful reviews from them as well. He is very no nonsense in his approach

and is able to explain behavioral issues from the viewpoint of the dog, which helps so much with

resolutions! You can tell that he truly loves dogs and has an instant rapport with them. I've been

very pleased and plan to continue to use him for lots of years to come.
Tonya F. (Sera & Molly)   Birmingham, Alabama

"My mentor, Chris Amick, had arrangements with the Greater Birmingham Humane Society,

that any dog adopted over 40lbs was free in his obedience classes. He also taught me that

you guarantee your work. If a person wants to come back 10 times through the same class

because they feel their dog needs a refresher, then that's just one more dog that is being

well cared for and properly socialized. Under his guidance I learned what a true Dog Trainer

was. It wasn't someone who was in it for the money, but for the love of the animal, no matter  how goofy the dog may seem. I know you can never get the credit you deserve. You have  made me a better person and a much better dog person than I ever could have been. You are my mentor and my friend and for that you are always in my thoughts and prayers."
Donna M.; Director of the Muhlenberg County Humane Society in Greenville, KY

"Hoss has had 2 months of service dog training at Shore Service Dogs in Salisbury, Maryland.  I had 12 days of very intense training. Hoss and I passed the ‘International Association of Assistance Dog Partners’ test.  We are now certified by you, ‘The DOGGUY’ and Mary ‘Shore Service Dogs’. Mary was very impressed with Hoss and me and I owe that all to you and your training."
"Hoss and I went to Books-A-Million this weekend and to Head-Start Hair Cut. He did great!

If I stand in one place he automatically goes to a down position from a sit. He is so COOL!

His navigation skills at Books-A-Million with such narrow isles and major busy was super!

We also went to Staples and he did super there also. If I step six inches in an isle he matches my distance. He anticipates my every move and is extremely focused on me. He is the VELCRO dog I need. You would just have to see him work; he is cool and a life saver for me.

Hoss and I appreciate all the training you did with us and I need more training. I am still adding more things for him to do for me. He loves to work!"
Daryl I.  Birmingham, Alabama

to bolt. I had some success training him to sit, come, and not jump on people, but his

responses were sporadic to say the least. Riley loves to run and we both enjoy hiking

on off-leash trails, but I could not steadily rely on him to come when it was time to leave

and had very little authority over him in social situations (with other dogs in particular).

to just run free. Both situations were very inconvenient and very dangerous.
So I called The Dog Guy. Chris came to my home to meet Riley, make an evaluation, and

classes. Our first training session Chris explained the use of the electronic collar and began

working with Riley. By the end of the session he was reliably responding to come and no

longer pulling on his leash. By the end of the second session he was heeling, sitting, and

completely off leash. The third session, at a local park, was a review and reinforcement of

everything we had learned. The final session was in the parking lot of a crowded grocery

store. Riley did awesome! He was not distracted by anything....people, cars, landscapers,

movers etc. He heeled at my side the entire time. We now take Riley to our local parks and

on walks throughout the neighborhood and he immediately obeys my commands. He is now

a very well mannered dog who does not bolt, even when I leave the front door open to bring

in groceries.
Initially I was skeptical of e-collars and felt that their use was ONLY appropriate for field

training and situations where corrections over long distance were required. I was amazed

that the proper use of the collar really had a quick, dramatic effect on Riley. He gets excited